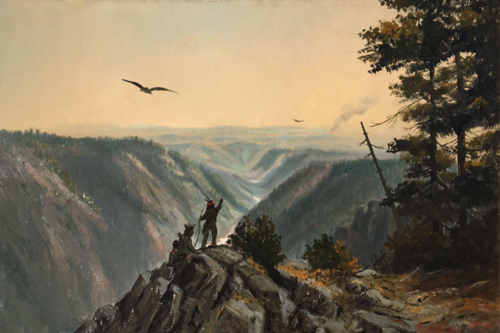 With all the things going on in these challenging times, I imagine we all need some good news, so wanted to share something I found positive at least and encouraging from God's reliable Word the Bible.
​
Found at Matthew 6:9-10, we pray the Lord's prayer, in part asking for "Our Father in heaven, hallowed be your name, your kingdom come, your will be done on earth as it is in heaven".. A question we might ask is, what benefits could be included with this request for the good conditions of heaven, to be here also on earth?

One assuring benefit is found at Isaiah 33:24 that says "And no resident will say I am sick"
As we know, When Jesus was here on earth, he gave us a glimpse of those benefits as seen at Matthew 9:35. He went to all the cities and villages teaching, preaching, and healing every sort of sickness and disease.

​Imagine a world without sickness...such an encouraging thought indeed! ;)
We can see a view of the future here for this earth in Psalm 37:10,11
"Just a little while longer,  and the wicked will be no more; You will look at where they were, And they will not be there.  But the meek shall possess the earth, And they will find exquisite delight in the abundance of peace."

I hope these verses brought you some comfort as well.  Thank you for your time.  For more information and practical steps to protect yourself, please visit JW.org 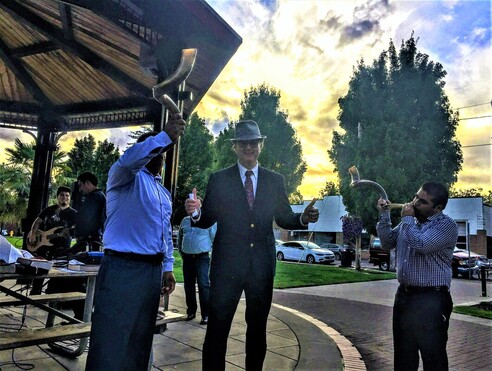 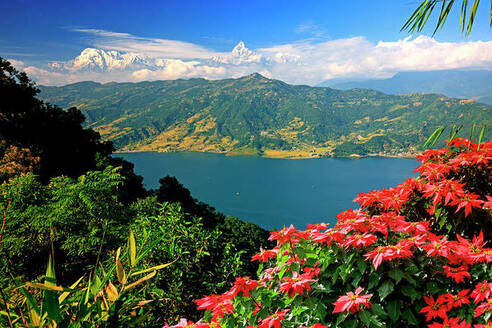 Praise Jehovah of armies,
for he is good and
​His loyal love endures forever!​
Psalm 83:18
Psalm 107 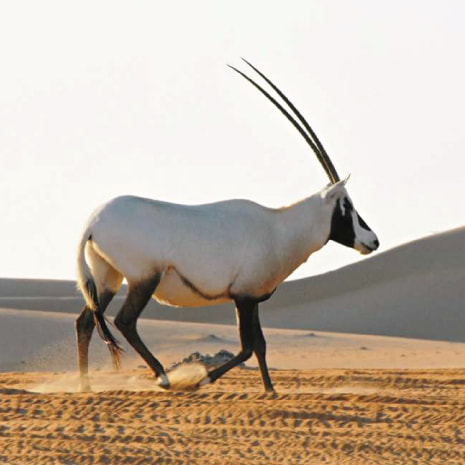 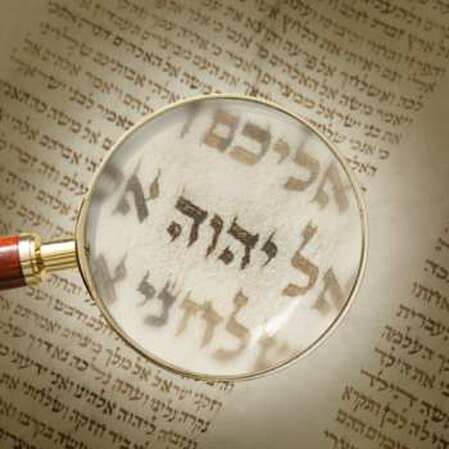 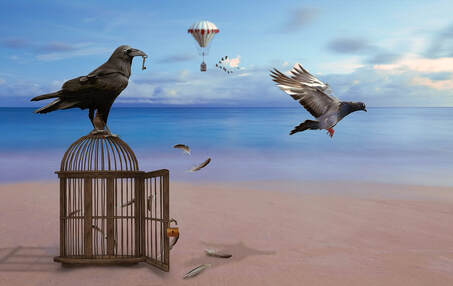 The picture above is of the Name of God "YHWH" or "YHVH" depending on dialect, ( Jehovah in English) known as the
"Tetragrammaton", written in the oldest Sematic script currently known to us.  There are variables to the name of the script depending to where it is found as well as some of the shapes of the script, but this is called the  "Proto Sinaitic Script".  Earliest findings of it are carved on the rocks of the Sinai Peninsula and are dated to be around 1840 B.C.E.  This script reflects a pictographic element to it in a nature similar to the ancient Egyptian hieroglyphics.

The Proto Sinaitic Alphabet script is posted directly above, starting from the Right to the Left, the A in the shape of an Ox head, or what is called in Hebrew the "Aleph".  We have the  A, B, G, H, W or V, Z, Chet, Tet, Y, K, L, M, N, S, A or ing, P or F, Ts, Q, R, S, T.  This script has been arguably  dated to the time when Joseph of the family of Jacob, co-ruled the land of Egypt. (Genesis 41:41-45) We find God's name
"YHWH" or "YHVH" (depending on dialect) in Exodus 3:14,15 that mentions that this name, "YHWH" or "YHVH", will be called this forever.
​
(Please note that sometimes the W or V that looks like a Y, as the 3rd letter from the left on the stone in the photo above, can also look like more of a rounded complete top instead of the open V shape with the stem.  So a little like a lollipop shape. Also, the Chet or the 8th letter in from the right to left, that looks like the shape of a person, is often portrayed as what looks to be a rope wrapping together or an upright T shape inside a rectangle box standing upright.  The next letter over or the "Tet" that looks like a "x" inside a circle, can also look like a lute stringed instrument, kind of like the shape of a guitar :)

The writing script above is called Paleo Hebrew and  is arranged in the way that reflects the English method from A - Z and Left to Right...however, in both Paleo and modern Hebrew, are read from Right to Left and the last letter in their alphabet is the "T" called "Tav" or "Tow" and not the "Z" as it is in English or Greek. Paleo Hebrew was used prior to the Hebrew's exile into Babylon.  It was formed after the Proto Sinaitic Script, but as you can see, has many similar characters.
Below we see "YHWH" or "YHVH" as some pronounce "YAHAWEH" or
or "YAHOVAH"  or "YAHAVAH" (AHAVAH means Love), depending on dialect (the Name known as Jehovah in English), written in Paleo Hebrew in the first 2 line variations.  The third line is
"YHWH" or "YHVH" written in the Hebrew that is still used today.  It originated from the ancient Aramaic script.  This script was put in use by the Hebrews after they returned to Jerusalem and built the 2nd Temple. This Name "YHWH" or "YHVH" can be found nearly 7000 times in the Hebrew scriptures. (The Name "YHWH" or "YHVH" is found in Strong's Concordance  #3068) See the Name mentioned at Psalms 83:18 in most Bible translations. The name "YHWH" or "YHVH" has been replaced however by the term "LORD" (a title, not a name) in most places by many Bible translations. The New World Translation of the Bible found at JW.org, has restored it. 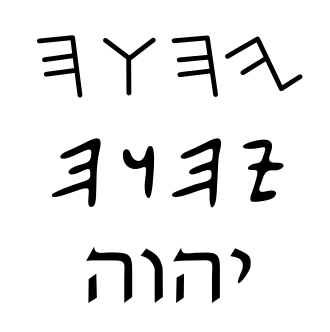 May The Name
YHVH
Be Magnified! 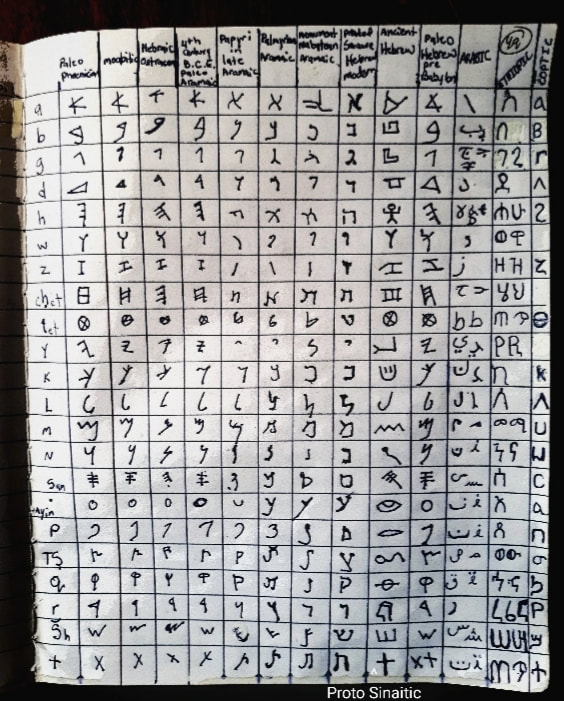 The language alphabet chart above in photo, is a work in progress noting the various languages.  Please forgive my scribbles and/or if any errors... I welcome any corrections or suggestions and is part of the reason it is being placed here.  The 14 languages reflected above in photo, are shown from Left to Right: Column 1: English 2: Paleo Phoenician 3: Moabitic 4: Hebrew Ostraca 5: 4th century B.C.E. Paleo Aramaic 6: Papyri Late Aramaic 7:Palmyrene Aramaic   8: Monument Nabatean Aramaic 9: Modern Hebrew 10: Proto Sinaitic 11: Paleo Hebrew 12: Arabic 13: Ethiopic 14: Coptic 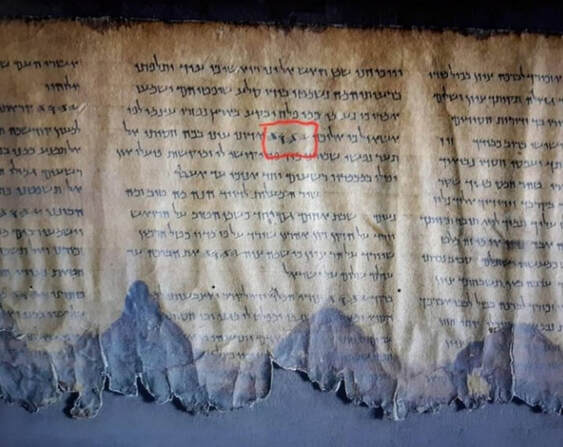 The photo above is a portion of the Dead Sea Scrolls called Psalm 11Q, that shows God's Name "YHWH" or "YHVH" highlighted in the red box.  It is written in Paleo Hebrew, and is different from the more modern Hebrew script written all around it.  This more modern form of Hebrew writing was adopted by the Hebrews after Babylonian exile and used today.  This shows evidence that the Scribes who wrote God's own Name "YHWH" or "YHVH" in the earlier Paleo Hebrew form, had great respect for this ancient style of script during its time of writing, that experts believe to be somewhere between 150 B.C.E. and 70 AD.
Photo below reflects an example of more of the same in showing God's name written in Paleo Hebrew  instead of the newer Hebrew that all the other text in the scroll is scribed in, that is except for the Name of God, in this Dead Sea Scroll portion in Psalms.

Above photo is from the New World Translation of the Holy Scriptures.  Visit JW.org to download this free Bible that includes photos like this in the Appendix.

THANKS FOR THE VISIT!